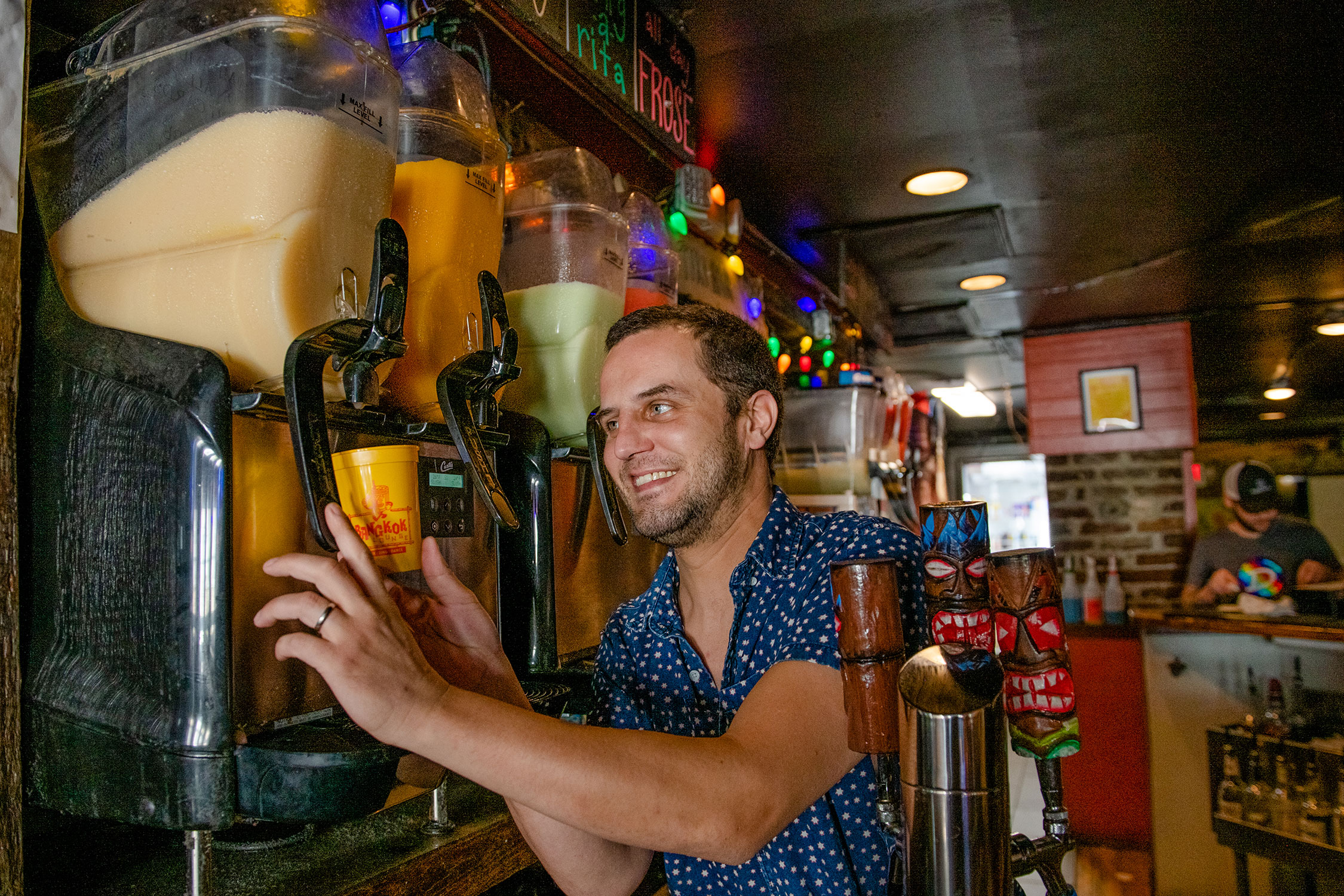 When the heat rises in Charleston, few things can cool you down better than an icy cocktail. Frosé, frozen margaritas and frosted painkillers are the mainstays of many cocktail menus, but a few bars in Charleston mix these flavors more so we can all keep our cool. Here is a collection of local establishments offering frozen imbibes.

This King Street karaoke bar lets you choose your own adventure when you need to escape the Charleston heat. They have seven frozen drink machines filled with banana, lemonade, mango, margarita, strawberry, pina colada, and rosé. Frozen bevies are not pre-mixed with alcohol, allowing customers to get creative when ordering.

“People have more fun with it,” said Bangkok Lounge general manager Matty Lane. “One of our regulars is a huge Elvis fan and for him we combined banana with Screwball whiskey and sprinkled bacon bits on top.”

If you’re not feeling particularly creative, Bangkok has a menu of popular combinations. In true Charleston style, there’s a banana pudding drink – a mix of frozen banana puree, Absolut vanilla vodka and Jameson whiskey topped with a sprinkle of cinnamon. For an extra kick, add a Kahlua float for an additional $3.

A 12-ounce serving of one of these frozen delights with homemade booze is $8, and you can upgrade to premium booze for $2 more. All are served in souvenir glasses, so you can remember a great evening of drinks and karaoke.

“We just wanted to have a fun tiki bar vibe, like you’re on vacation, sitting on the beach, singing karaoke, and drinking frozen drinks,” Lane said.

This poolside bar is located inside the Ryder Hotel on Meeting St., serving tropical cocktails and coastal cuisine. A day by the pool wouldn’t be complete without an icy cocktail, so Little Palm created the “Green Light”, which has become a menu mainstay. It is a unique combination of sauvignon blanc, pear brandy, Midori and chareau aloe vera liqueur.

“We wanted to create an option with a lower ABV,” said general manager Sam Penton. “A lot of times with Frose you get one, and that’s a lot. So we wanted something you could sit on and have a few. add a float of rum, Pastis (aniseed aperitif) or homemade jalapeño tequila.

In addition to offering a low-alcohol drink, Little Palm wants customers to experience a memorable flavor combination. “We really wanted something fruity, but in a way that you’re not used to,” Penton said. “Combining those flavors of pear, honeydew, aloe vera, muskmelon, things like that as opposed to your typical strawberry or pineapple type of drink.”

Due to its popularity, The Green Light has earned a permanent place in Little Palm’s two-chamber frozen drink machine, while the other flavor rotates. “Every time we make a new frozen drink, our bartenders take their time getting the measurements right,” Penton said. “It’s really important to get the consistency of the drink right, which takes a bit of time and chemistry, making sure it’s balanced and has the right amount of acidity so that it doesn’t not be just a sugar bomb.”

Little Palm recently extended its hours of operation and now opens at 11 a.m. daily, while closing time remains at 11 p.m. Stop by for classic cocktails at discounted prices during happy hour from 4-6 p.m., Monday-Thursday. On Mondays there is also the option to stay for live music from 7-9pm.

This brewery is a relative newcomer to the Charleston scene, having opened its doors in October of last year. Although one would assume that patrons of a brewery would enjoy the beer, owners Mary and Jason White wanted to have a drink for everyone, and that’s how blush (beer slushy) was born.

“Most breweries, if they have a brew it will be made with beer, not something someone who doesn’t like beer would like, so ours is pretty sweet,” Mary said. The first blushing flavor to appear on the menu was the margarita, which the couple created using the same recipe they use to make margaritas at home, swapping the tequila for beer.

The brewery now offers four main flavors on the menu: margarita, piña colada, lemonade and strawberry daiquiri. Each of the blends is homemade and tested with different beer flavors by owners and customers to create the best combination.

“The customers are the ones who came up with these blends,” added Jason. “They’re constantly saying, ‘Give me half that beer and half that blush and let me see what it looks like. If you’re mixing a beer with a blush, Mary recommends mixing the Tippy Toe Infusion with the Lemonade Blush for an extra cool and refreshing spritzer.

Since beer is the only source of alcohol for the blushes, they are around 5% ABV, making them a refreshing and light summer drink. The brewery’s Hefeweizen brew, Tippy Toe, is used in all four basic flavors except the margarita. “Since the Tippy Toe has the flavor of banana and hints of clove, this one went really well with the piña colada and other flavors,” Mary added.

If you can’t decide between flavors, Edisto River Brewing has some knockout flights. Also be on the lookout for seasonal specialties, like pumpkin pie in the fall or Maman Bahama in the summer. Visit Johns Island Thursday through Sunday to cool off with a free, red popcorn.

city ​​paper has been bringing the best news, food, arts, music and event coverage to the Holy City since 1997. Support our ongoing efforts to showcase the best of Charleston with a one-time donation or become a City Paper member Club.

Know Your Farmer at Rogue Artisan Foods, courtesy of Savor